Skip to content
After many years I visited the Philatelic section of the Head Post Office in New Delhi on Sansad Marg. The Philatelic Bureau has been relegated to a corner room towards the back of the large post office. Thankfully they do have a large room. And thankfully philatelic stamps are still sold in a room in the main area, which was heartening to see. I ended up buying one copy of all the miniature sheets they had at the time, which unfortunately weren’t too many. But the good part was I managed to open a Philatelic Deposit Account. This means I will get all new issues now at home. I am very kicked about this and am waiting eagerly for the next issue of new commemorative stamp.

My next stop was the Philatelic Museum located in the same building. I was the first visitor for the day. I was pleasantly surprised to see that it was a fairly large museum. In addition to the stamps they have some interesting artefacts of things used by postmen in different times. Indian stamps were organized by the year and by themes too. Not too many items were for sale there but it was worthwhile spending some time there. I do wish they would turn on more lights in the museum. No photography was allowed in the museum but I found a pic on the Internet that I am sharing with you here. 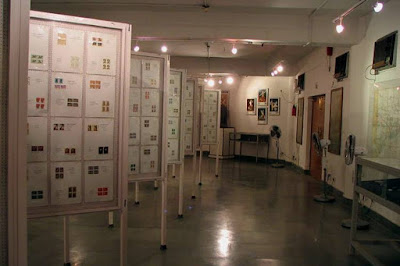