Skip to content
When I restarted my hobby, I picked up the thread on my collection of stamps from India’s Struggle for Freedom series. I had originally posted about this in Jun 2016. Since then I have finally managed to complete this series. Technically it took me 34 years to complete this series, since I bought the first stamps from the post office when they were issued :-).

Different sources on the Internet provide varied information about this series on India’s Struggle for Freedom. One source talks about the series starting in 1983 with the ambition of issuing 4-6 stamps each year until 1997, marking the 50th year of India’s Independence.

The Philacent India catalog lists seven series from 1983 to 1989 with 44 stamps as India’s Struggle for Freedom series, with similar design of tricolor on the edges commemorating a freedom fighter personality. Post 1989, there have been a few stamps with tricolor being used in the stamp sometimes on the edge, sometimes in another way, but none like the design of tricolor on both edges. Also the catalog doesn’t list the other issues as part of the Struggle for Freedom series.

The official India Post website run by the Department of Posts (Ministry of Communication, Govt. of India) lists only the first three stamps in the series as INDIA’S STRUGGLE FOR FREEDOM. The other stamps are listed as commemorating specific personalities.

Here’s my exhibit for India’s Struggle for Freedom series.

Ships on stamps always makes an interesting theme. Countries have long issued stamps with intricate designs of ships on them. Here are few stamps of this theme.

Norway 1991, To commemorate the centenary of the Norwegian Society for Sea Rescue

The Norwegian Society for Sea Rescue was founded on 9 July 1891. The first rescue boat went into service in 1893, and in 1894 the Colin Archer saved 37 lives in a storm. Colin Archer (1832 – 1921) was a Norwegian naval architect and shipbuilder from Larvik, Norway.

He and his shipyard were known for building durable and safe ships. The most notable single ship built by Colin Archer was the Fram, which participated in expeditions to the North Pole and, later, in Roald Amundsen’s historic first expedition to the South Pole; Fram is now preserved in the Fram Museum on BygdÃ¸y, Oslo, Norway.

Today, there are 43 vessels continuously manned and on standby along the coast of Norway. The society has about 6000 engagements every year. 13 of the 43 boats are operated by volunteers,  the rest of the boats are manned by a professional crew who live and work onboard on a 28 day rotation.

And some more from my collection:

When I dug out all my old collection, I realized that I have collections of countries as well as themes. I am torn between whether to collect countries of themes. I think themes make a nice collection but countries are easier to catalogue and document. 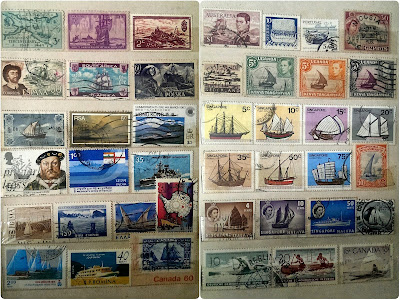 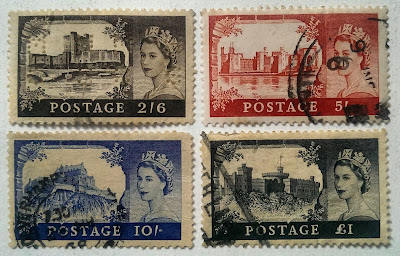